Public health threatened by the spread of vector-borne diseases. Availability of appropriate diagnostic solution for disease management and disease elimination is still a challenge. A new approach might change the situation for the fight against malaria. 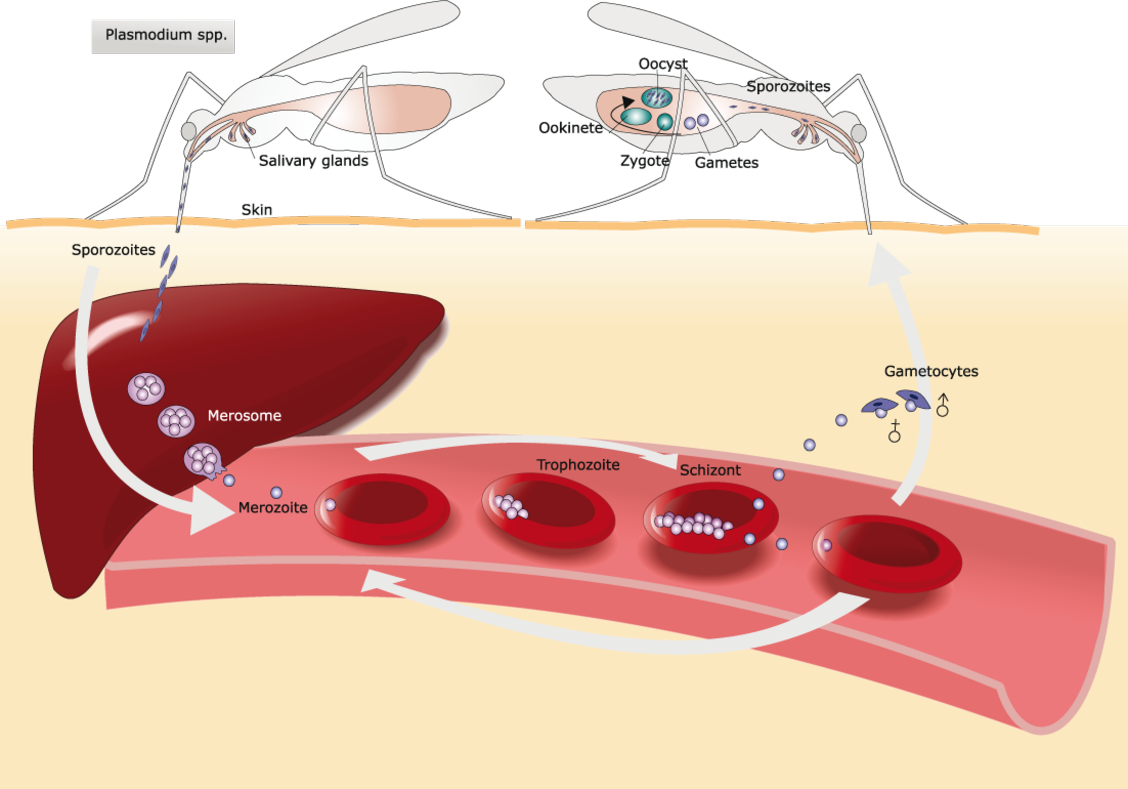 Malaria and its Life Cylce

There has been a renewed interest in VBDs due to the recent spread of Zika virus, which is linked to causing microcephaly birth defect.

VBDs are often fatal and/or debilitating. They constitute more than 17% of global infectious diseases. Every year more than 700,000 people die from vector borne diseases1. Although mostly found in the tropical and sub-tropical regions, increasing global travel, urbanization, and climate change contribute to VBD outbreaks in new regions. Not only in resource-limited settings, there is still a lack of rapid, accurate and cost effective diagnostic testing. This makes VBDs among the most difficult of all infectious diseases to prevent and control. Therefore, a major way of disease prevention is to make people aware of accurate diagnosis, sanitation habits and vector control mechanisms. HUMAN is committed fighting infectious diseases, especially in resource-limited settings.

Examples of VBDs with the respective vector and pathogen

Malaria - Diagnostics at the Forefront for Disease Management and Elimination

Although P. falciparum and P. vivax are the most important species due to their widespread prevalence, malaria caused by P. falciparum is the most deadly form2. The P. falciparum parasite is able to avoid the body's immune system for most of its life cycle. It replicates rapidly in the blood so the infection can quickly progress to a point where the disease becomes very severe. Additionally,  . falciparum causes the surface characteristics of the infected RBCs to change making them "sticky." These RBCs stick to the endothelial cells that line the lumen of blood vessels. This adhesive property of RBCs poses the greatest risk of vascular occlusions - especially in the capillaries, causing cerebral malaria, or in the kidneys - resulting in hypoxia and serious organ damage. 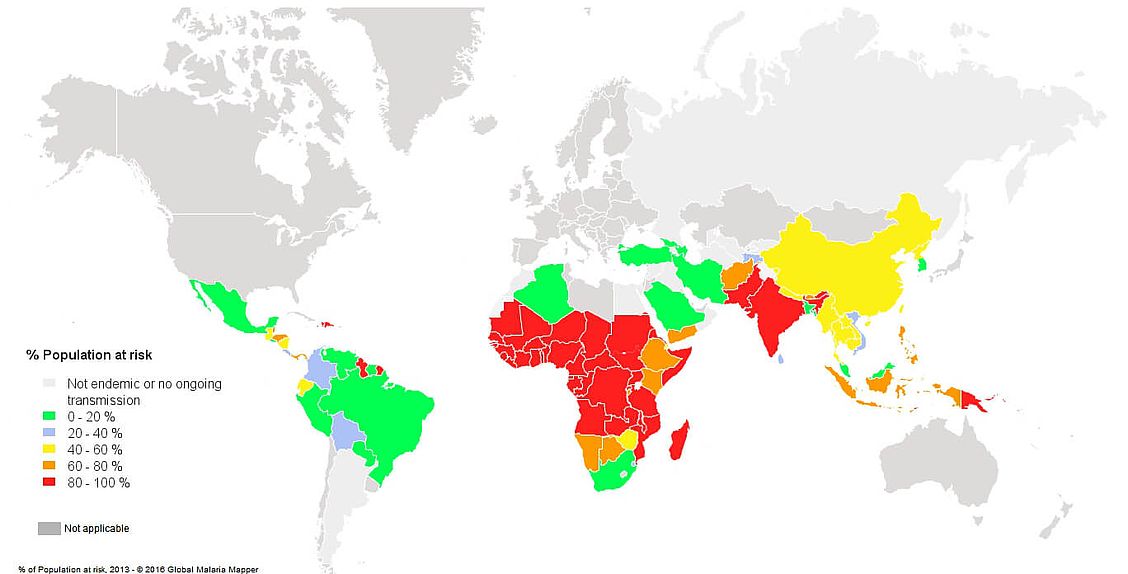 Fig. 1. Population at risk contracting malaria according to data from 2013 3

Accurate and rapid diagnosis is critical for effective malaria treatment, control and elimination. Unselective malaria treatment for suspected diseases paves the way for the rising levels of anti-malarial drug resistance (FIND). Currently, WHO recommends prompt malaria diagnosis in all patients with suspected malaria either by microscopy or malaria rapid diagnostic test (RDT).

A major drawback of microscopy is the need for well-trained, competent microscope specialists. This is impractical especially in field settings. Rapid diagnostic tests (RDTs) are ideal especially in field settings. However, only a few of the available RDTs can directly detect P. vivax infections and none can directly detect the dormant reservoirs of the vivax parasite in the liver, see below.

As sensitive as PCR, as robust as RDT

Nucleic acid amplification techniques (NAATs) such as real-time PCR are capable of identifying subclinical, submicroscopic infections. Still, real-time PCR remains inaccessible in resource-limited and remote settings due to the expensive infrastructure, reagents and technical expertise required. Isothermal molecular diagnostic techniques such as loop mediated isothermal amplification (LAMP), nucleic acid sequence based amplification (NASBA), thermophilic helicase dependent amplification (tHDA) and recombinase polymerase amplification (RPA) have the potential to combine high analytical sensitivity with technical requirements that facilitate application even in remote settings. Now, according to FIND, LAMP has become a forerunner in this respect as it offers the benefits of sensitive and specific testing combined with minimal set up requirements and high throughput capabilities5,6.

LAMP opens the door for effective malaria elimination campaigns and projects. In addition to P. falciparum, specific detection of Malaria vivax will also be possible with LAMP in the near future (assay is under development).

In conclusion, the control and elimination of malaria reliable detection of subclinical cases is indispensable. The good news is that appropriate technologies like Malaria-LAMP are available. 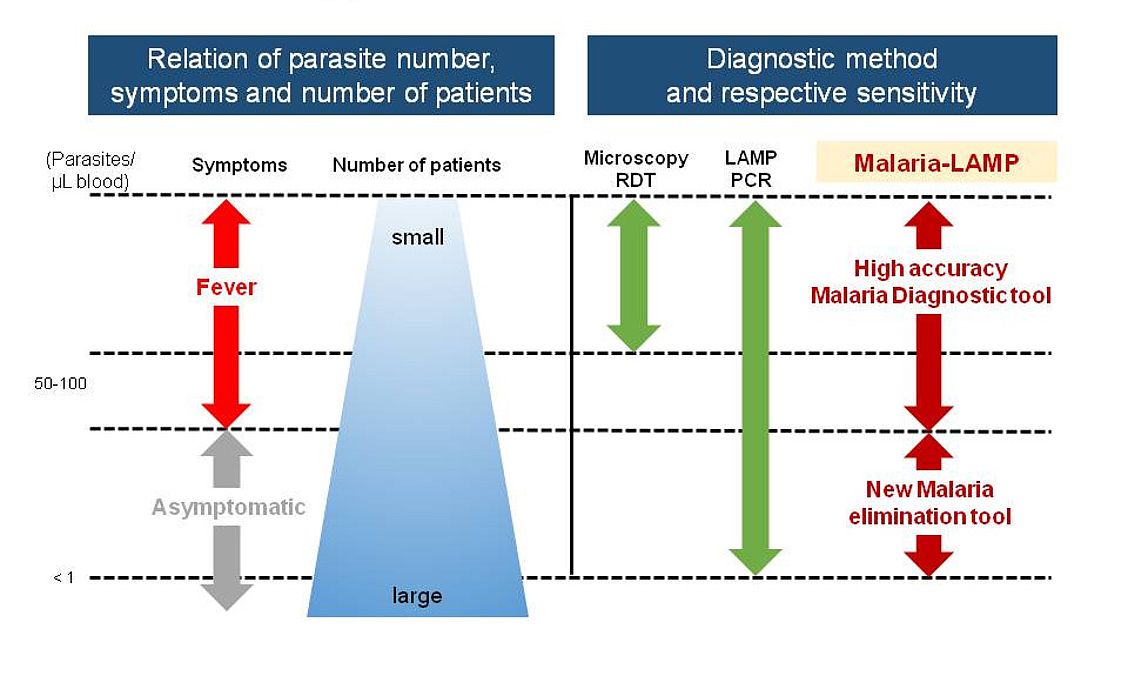